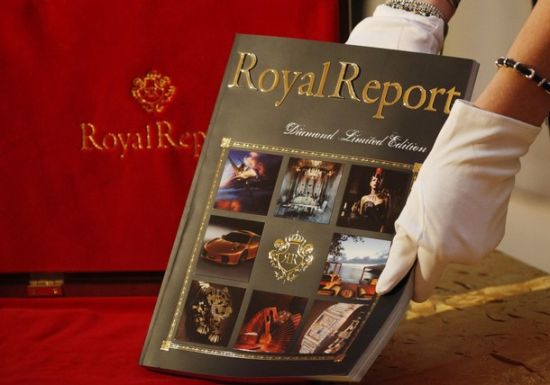 A model displays a special edition of luxury magazine „Royal Report“ in Prague October 8, 2009. The special edition, with gold letters on the cover and diamonds on the alphabet R, will be put up for auction and is expected to fetch more than 4 million Czech crowns ($228,936). The price includes the special edition, a yearly subscription, a vacation four times a year to anywhere in the world and 12 hours use of a jet plane. The organizers are aiming to be listed in the Guinness book of records with the most expensive magazine in the world. A portrait of Czech-born Ivana Trump, ex-wife of property mogul Donald Trump, is in the background. REUTERS/Petr Josek (CZECH REPUBLIC MEDIA SOCIETY)